The Cyprus Centre for Environmental Research and Education (CYCERE) recognizing that all Cities and Communities can make a real contribution to sustainable development, the improvement of living quality of life and the  protection of the environment, and that their actions have a direct or indirect impact on the local, regional and as an extension, the global environment, aims at the emergence of Green Cities or Green Communities in Cyprus, which have adopted and developed environmentally friendly policies and practices.

We believe the improvement of the urban environment of Cypriot cities and communities can be achieved through local initiatives such as increasing green areas, gardens and parks, sustainable waste management, environmental awareness and education, energy saving and the use of Renewable Sources of Energy, Sustainable Translocation and Transportation and other initiatives.

For promoting the Green Cities or Green Communities in Cyprus, that have adopted and developed environmentally friendly policies and practices, the CYCERE Annual Pancyprian Awards “Green City or Green Community of Cyprus” are established under the auspices of the Environment Commissioner and are co-organized with the support of the Union of Cyprus Municipalities and the Union of Cyprus Communities.

The aims of the “Green City or Green Community of Cyprus” Awards are:

Cities and Communities of Cyprus can apply for one or more of the 12 “Green City or Green Community Awards” categories.

The Categories of the “Green City or Green Community Awards” can be read thoroughly here where you can also submit your candidacy. More information can be found on the Informative sheet attached.

Five (5) distinct stages must be followed.

Subscription stage
Afterwards, the subscription as a Municipality or Community should be submitted according to the number of categories you wish to be considered candidates. The fees are considered symbolic and are required for covering the expenses of the Administrative and Scientific support.

Support and Documentation stage
During this stage, CYCERE will support you as to perform all the required activities for submitting all the required documents for supporting your candidacy in the chosen Award category. You can find the “Documentation of Actions/Activities/Solutions” file.

Note:
– Projects submitted and awarded cannot be re-awarded.
– Award-winning works cannot be re-submitted unless there are new results, specialization with new elements and enrichment.
– The Green Capital will be the Municipality or the Community that will collect the highest score of all the candidate projects of all categories.

Report from the Journalism Conference for the Announcement of the Awards

From the ANT1 News

From the RIK News

The Network automatically included as many cities and communities as were awarded by the President of the Republic of Cyprus, Mr. Nikos Anastasiadis, with the said award for the year 2017 and are the following: 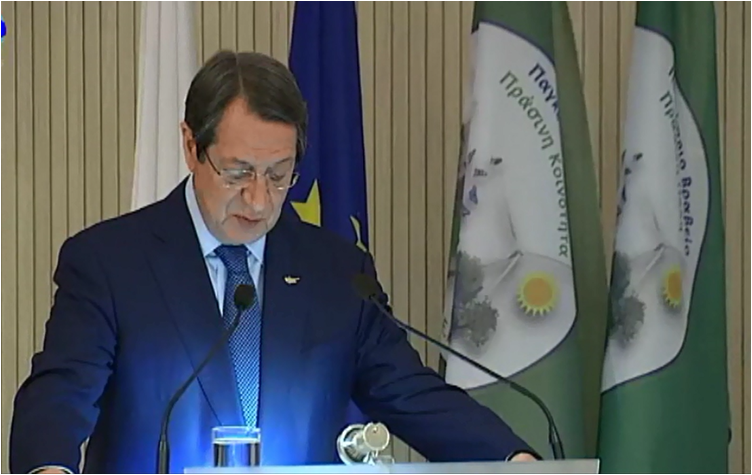