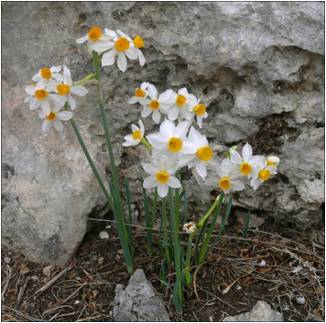 “… in order the germinate seed to grow/…  and with red poppies, lilacs and Narcissus your sunken girls, …” says poet Andis Kanakis in an ode to the occupied land of Mesaoria in the poem Mesaritic Asma. Some flowers that make up a beautiful and vibrant image in everyone’s mind. The bright poppy red and the vibrant colours of the lilacs are enriched by the intoxicating aroma of Narcissus to awaken all our senses.

Narcissus is a perennial herbaceous plant of the Amaryllidaceae family with small white flowers and a characteristic, intense aroma. It is a common indigenous species of Cyprus but also of the Mediterranean countries in general.

Blossom
Flowering is observed in November-February while its hardiness has contributed to the growth of its cultivation.

Name Origins
The first synthetic of the Latin name of the species, Narcissus tazetta, refers to the mythical Narcissus. According to legend, Narcissus was so beautiful that all the Nymphs had fallen in love with him but he did not respond. Thus, the Nymphs demanded his punishment, which occurred when the young man looked at his reflection in a fountain, thus falling in love with himself. Unable to get his attention away from the water, the young man is left in the area to slow down and the homonymous flower appears in his place. In addition, the tazetta refers to “parastefani” a cup-shaped, meaning “taza” in Italian.

Other information
The odorousness of the plant has attracted the interest of many ancient scholars, with the earliest reference perhaps being to the Homeric Hymns of the 9th-8th c. B.C. wherein “Dimitrian Hymn” the beauty and fragrance of the plant are emphasized. There are also references to Narcissus in the writings of Theophrastus and Dioscurides who even cite the recipe for making narcissus myrrh which was believed to have medicinal properties. According to some analysts, the very strong smell of the plant can cause sweet drowsiness and therefore the name of the plant may also come from the verb “narco”.

Pharmaceutical Properties – Other Uses
Recent research suggests that the plant contains galantamine, which can cure dementia and in large quantities Alzheimer’s disease. Finally, Narcissus wreaths have been found in ancient Egyptian tombs and are likely to be one of the flowers described as “field lilies” in the Matthew and Lucan Gospels since they are still used in the preparation of the holy myrrh.