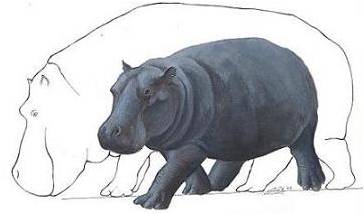 Description
The dwarf hippopotamus or the scientific Phanurios minor are one of the oldest mammals in Cyprus, estimated to have arrived on the island 10 to 12 thousand years ago [1,3].
Hippopotamus dwarfs were 1.50 meters long and about 75 cm high. Other notable features were the shape of the jaw, the position of the eyes and nose, the size of the limbs, the soles of the feet, characteristics which indicated that these animals were more likely to walk than swim [1,3]. It was at that time the first largest animal of Cyprus, was a herbivore, a land animal and not an amphibian, like the hippopotamus we know today, and had no natural predators [3,4].

Nanismus
With their installation in the island, they have undergone major evolutionary changes to adapt to their new environment [1]. The most important change that occurred was nannism, that is, small body size and weight, a phenomenon that is also observed in other Mediterranean islands, such as Crete, Sardinia, Rhodes and Sicily, etc. [1,2,5]. This change was due to their isolation and limited nutrition [6]. Their new size has given them greater agility and adaptability to their relatively mountainous new environment with limited sources of food [1].

Migration to Cyprus
There are different versions of how the dwarf hippo managed to emigrate to Cyprus. One version is that during the period of the creation of Cyprus, huge amounts of water were frozen in the ice. This resulted in a large drop in sea level and the formation of small islands east of the Cape of Apostle Andrew. It is believed that these islands helped the Hippopotamuses to move to the island [6]. Another version is that they arrived on the island by swimming or floating on tree trunks, as there was no land-based land bridge between Asia Minor and Cyprus [1,3].

Extinction
The dwarf hippopotamuses of Cyprus disappeared from the island about 10,000 years ago, making it the last dwarf hippopotamus in Europe [3,5,6]. Hundreds of bones of engraved hippopotamus pygmies were found on a rock cover in the Aetokremous area of ​​Akrotiri, believed to be marks made by sharp stone tools [1,7]. These findings suggest that the man of the time was hunting for these animals, killing them and chasing them for food, thus possibly contributing to their extinction [1,6]. From other cases of extinction of similar prehistoric animals from islands, such as Corsica, Sardinia, Sicily, it is widely accepted that the cause of their extermination was their hunting and alteration of their natural habitats by prehistoric humans [2].
Fossils of pygmy hippopotamus bones have been found in more than forty (40) sites and mainly in caves at the foot of Pentadaktylos, as well as in the area of ​​Xylophagos and Ayia Napa [1,5]. In many parts of Cyprus the fossilized prehistoric bones of these animals were considered by the inhabitants to be the bones of saints or martyrs, while in other cases human imagination attributed them to the remains of dragons [3].