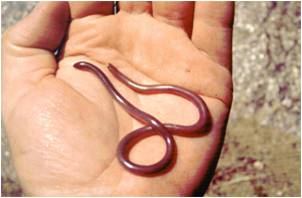 Anilios (European blind snake) is one of the smallest snakes in Cyprus with a length not exceeding 40 cm and with a very thin trunk that creates a thorn-shaped end in the tail area helping to anchor the snake to facilitate its movement. Body color is light beige or pink without any particular color diversity or racial conformation [1,2,3]. The size, body color and tiny eyes of this snake give the wrong impression that it is an earthworm. However, a more detailed observation of the snake’s body reveals small flakes, one of the main features that distinguishes reptiles from other groups of animals [3].

Name
All members of this family are adapted for underground living, and their eyes appear to be highly shaped, giving the impression of two small dark dots on the edge of the extremely small head [1,2,3]. It is precisely from this characteristic that the Latin name derives from this family, since the small eyes give the impression that the snake is a blind fact which is partially true since these animals can only visually perceive alternations of light and darkness and not pure images [2 ].

Food
It feeds on small arthropods such as spiders, ants and termites which it finds in the arcades it digs and does not carry any poison so it is not a threat to humans

Habitat
Anilios is located all over the island, mainly in areas with soft soil to facilitate digging and in places with scattered stones, beneath which it hides especially during the summer months.

Protection
This should be emphasized in particular because of the human prejudice against snakes and the urban myth that anyone who is bitten by a particular snake dies before the sun sets out. Therefore this snakes are been exterminate [1]. At present, the size of the Anilus population in Cyprus has not been fully clarified as the adaptation of the snake to underground life makes it particularly difficult to identify and measure it. However, the snake is protected as it is included in Annex III to the Berne Convention as practices such as the de-naturalization and conversion of urban areas, the use of shrub lands and the contamination of soils could be potential hazards for of the snake [1,3]. It is up to us all to protect this utterly harmless snake that further enriches the biodiversity of our land. Let us limit activities that could be harmful to the population, let us convey the message of how harmless it is, and let us all help create an appropriate legislative framework for the full protection of Anilio.