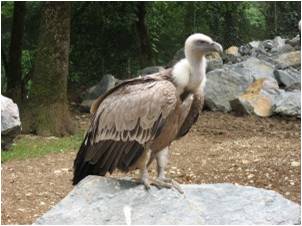 Description
The Griffon Vulture, as it is called, is the largest bird in our country at about 1 meter in length and opening wings about two and a half meters. Its plumage has a light brown color, while the edges of its wing and tail are black. His head and long neck are covered with white fluff only [1].

Biology
This imposing bird is very social and nests in groups on steep cliffs. It lays in mid-January to early March an orange-sized white egg that are incubate by both sexes for about 54 days. Until they leave their nest, they are fed by both parents for 115 days [1].

Food
The vulture feeds exclusively on carcasses [2]. To trace its food, it relies on its strong eyesight or the movements of other birds that eat it, including carcasses, crows and corals. Therefore, as a carcass animal, it plays an important role in the recycling of organic matter. Vultures are “rural cleaners” and help in their own way to keep the environment healthy and clean [1].

Protection
In the old years this bird abounded in our land. However, in the last 20 years the population of the Gypsies in Cyprus has declined dramatically, with the immediate threat of extinction. The main reasons for this decrease are targeted control, poisoning by foxes and hounds, reduced feed due to intensive stockbreeding, and disturbance during nesting [1,2].
The rapid decline of the Vulture population led the competent authorities in Cyprus (Hunting Fund, Forestry Department) together with the BirdLife Association and others to develop the Vulture management plan under the Cross-Border Cooperation Program Greece – Cyprus 2007-2013. Its main objective was to empower the population of Vulture in Cyprus with birds from abroad and specifically from Crete, whose population was considered the most suitable for empowering the Cypriot population because they are the closest genetically and geographically similar [3]. The “Gypsum Project” was successfully completed in January 2014. As part of the project, 25 craters were imported from Crete, which were housed in specialized cages. Five of them have already been released and dominate the sky of our island. At the same time, information and awareness-raising activities were undertaken to help save the student [3]. The GYPAS project has given the necessary impetus to the effort to protect and preserve the Gypsum in Cyprus, but this effort must continue as 25 vultures are not enough to recover the population.

Other information’s
It was for the ancient Greeks the divine servant who carried the human souls into the distant universe [1].