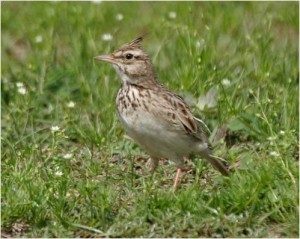 General Information’s
Cyprus crested lark or as it is commonly called in Cyprus, Tsouroullos has the scientific name Galerida Crisata Cypriaca and is a very common winged resident of Cyprus. It is an endemic subspecies of Cyprus belonging to the larks family and to the class of stray birds. A very small number of this bird also visits the island as a passing migrant. It is found mainly in lowland and semi-mountainous areas, mainly in fields and residential areas [1,3].

Description
Its body is slim in size from 15cm to 17cm. This small island bird of our island has a gray-brown plumage with dark streaks all over its body. Its wings are long and pointed. Its beak is short but very strong in the shape of a small cone. Its special feature is its crest which is always lifted. It also remarkable feature on its toes, where the nail on the back of the toe is twice the length of the big toe so it can be easily hooked [1]. Its enemies are mainly small predatory carnivorous mammals. This unique feature helps him to adapt easily to the places where he lives mainly on his walk on trees, as well as to catch his prey very quickly.

Reproduction
Its eggs are pale gray and gray-brown speckled. They giving birth to 6-7 eggs. Egg kicking is undertaken by the female and lasts 12-13 days [3,4].

Protection
According to statistics, the population of this species has declined dramatically in recent years on our island. Agricultural machinery destroyed the places where this species lives. Also, the places where he can easily find his food have been destroyed. The use of chemical pesticides is one of the major causes of its food destruction and as a result they are dangerously shortened [2]. What are the measures we can take to protect the birds in our country? There are many ways. Let us not destroy the ecosystems that this species can survive. Let&#39;s stop the destruction of the places where he lives. Let us protect even the small number left on our island.