The species of January 2020 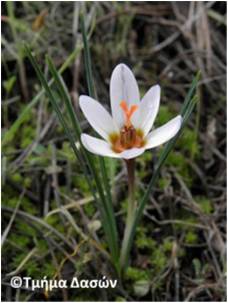 Description
Crocus hartmanianus is a perennial bulbous perch up to 15cm high. It has 3–4 leaves at the base of the plant, linear, obtuse, equal to or longer than the flower height at flowering, 1–1.5 mm wide, hairless. The flowers are white or lilac with intense violet complexion or streaks. It is a very rare plant, included in the strictly protected plants of the Bern Convention.

Spreading
The yolk of harthmanios is an endemic species of Cyprus of which only 3 sites have been confirmed, 2 in the Mahaira Forest and the other in the Tripa Vouno area, Pentadaktylos, where it was found after 50 years. The few plants found at the Platanias Forest Station in 1991 have disappeared and the plant was not even found in Asinu where it was collected in 1990, although the site was investigated in 2005. There are also collections (period 1905–89) from other sites in the area. Machaira Forest, near Machaira Monastery and Kionia, which have not been confirmed recently. The Department of Forests in 2017 relocated and counted 1,500 plants of the rare endemic Crocus Hartmann in the burned area of ​​Soleas, at the Roccia site (3).

Habitat
The habitat of the plant is the rocky slopes with igneous limestone rocks and forests.

Flowering – Fruiting
The flowering of the plant in January – February and the fruiting is April – May. Germination of its seeds is favoured at temperatures of 10 ° C and 15 ° C and is completed in 60 days. It presents the phenomenon of amphicarpium. Amphicarpia is characterized by the burying of a number of sperms near the mother plant and is an effective method of securing indigestion. The ecological importance attached to amphicarpium is to protect grazing animals and to avoid sowing in an inhospitable environment.

Conservation – Protection
As for its conservation status, all three known sites are in state-owned forest land. In the Mahaira Forest, the sub-population (5,500 plants) is threatened by possible expansion or reopening of an adjacent quarry. The sub-population at Pentadactylus (500 plants) is in an inaccessible area – isolated peak 1 km from the end of the dirt road – and does not appear to be threatened.

The largest population is in the Mahaira State Forest, which has been declared a National Forest Park. The second subpopulation is in a state-owned forest that has opted for Natura 2000 but has not yet been proposed due to Turkish occupation.