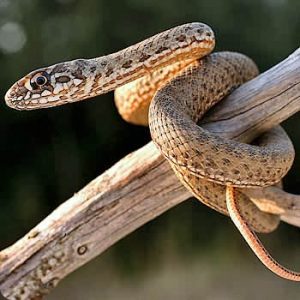 Description
The Eastern Montpellier Snake is one of the 8 species of snakes found in Cyprus [1,2]. Its length can exceed 2.5 meters and it has large eyes, a feature of its good eyesight, which is its main feature [1]. At the back of her jaw she has 2 large teeth with venom glands at their base. Her body color varies depending on her age. Minors have dark spots that alternate with yellowish or brown spots, while adults are characterized by a uniform dark gray, oil green or gray color on their back and a light gray, yellowish or brown color on their abdomen [1].

Spreading
It is found in areas with bushy vegetation but also in cultivated areas, as well as in forest borders. These areas are an ideal habitat for the Eastern Montpellier Snakes if they contain stones or rocks so that it can be hidden and protected from its enemies [1,2].

Reproduction
Females lay their eggs under the stones about a month after the breeding season, which begins in April and July. They continue from their hatching until the beginning of autumn. The life span of an individual of this species is estimated to be more than 15 years.

Special features
It is a venomous snake, but it is not dangerous to humans. If it bites a person, it can cause local swelling and at the same time a headache or fever for a day or two, but in no way is it life threatening [1,2]. In addition, it is worth noting that this species is listed in Annex III to the Bern Convention and is a protected species.