Biodiversity: The diversity of life – Description of the program

This daylong program is based on a sequence of activities that give emphasis both on theoretical and practical aspects as well as on the aspects of the expression and evaluation. It is organized in such a way that supports the conceptual development of students on both environmental concepts and issues and at the same time, its design enables a smooth transition from the simple to the complex, from the familiar to the unfamiliar and from the easiest to the most difficult.

1. Mission
Students receive at their schools a letter from the educators of the Environmental Center. This letter invites students to compete to the “Game of Life” so as to enrich their knowledge and to win prizes.

Students, at the first two rounds, by watching a short documentary and creating a poster, they gradually develop an understanding of biodiversity as well as of the three levels of biodiversity.

3.What’s the value/importance of biodiversity?

Students, at the third round of the game, through an entertaining pantomime, are asked to present to their students or to guess by watching their students, the reasons that render biodiversity important.

4.Why is biodiversity threatened?
At the fourth round, students, by participating into a theatrical game, they are asked through a role-play in order to discover all the dangers that threaten biodiversity and lead gradually into its reduction.

5.What can we do about biodiversity?
At the next two rounds of the game, students by watching a short presentation and by participating into an experiential game, the led into the attitudes and behaviors that human should develop so as to contribute for the protection of biodiversity.

6. Summing Up
At the last round of the game students are asked to participate into a quiz concerning biodiversity. In that way, students sum up everything that they have learned about biodiversity during their visit. 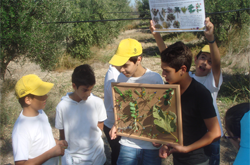 Biodiversity: The diversity of life – Introduction

This program promotes the development of researching skills in the field studies placed into the ...