Species of the Month

Cyprus is characterised by great biodiversity of great importance.


Up to this day far, 1908 different species, subspecies, varieties, forms and hybrids of plants have been recorded in Cyprus. Based on published data, this figure includes all indigenous plants without taking into account cultivated plants. The endemic plants species of Cyprus meaning those the dispersion of which is constricted only to our island, reach the number of 140 (an endemic rate of 7.3%) and are of great importance for our island’s flora.

On the other hand, the Cyprus fauna consists of 30 mammal species that have been recorded in Cyprus of which 16 are bats, 10 are terrestrial, 3 are dolphins and 1 is a seal species. The largest of these is the Cyprus Muflon (Ovis gmelini ophion).

In addition, Cyprus is located on one of the eight main corridors of bird migration from Europe to Africa and vice versa. The birds that have been recorded so far in Cyprus amount to 370 species out of which 53 are permanent inhabitants and the remaining 317 are migratory species. Six of the permanent inhabitants are considered endemic out of which 2 are considered species and 4 subspecies. There are also 22 reptile species in Cyprus, of which 8 are snakes, 11 are lizards and 3 are turtles, 2 marine and one of freshwater. There are also 3 species of amphibians (frogs). There is also a variety of insects found in Cyprus, of which 52 species are butterflies with 9 endemic species.

The Cyprus Centre for Environmental Research and Education presents to you once every month a species from the flora or fauna of Cyprus as the “Species of the Month” and provides you with the most basic information about this species! Cypriot flora and fauna are one of the most valuable treasures of our island and the studying of them will also make us richer …

Species of the month Comments Off on The species of 2013 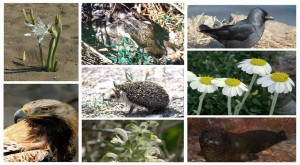 END_OF_DOCUMENT_TOKEN_TO_BE_REPLACED

Species of the month Comments Off on The species of 2012 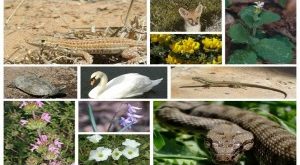