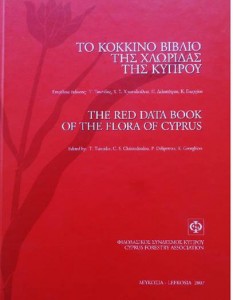 The Red Flora Data Book of Cyprus is an important product of research activity and it was funded by the Research Promotion Foundation within the framework of the Research Project KIPRINIA 93/5th EE-2002 having as grant holder the Cyprus Forestry Association.

The red data books and the red data lists are used internationally, containing all the endangered plants and animals by classifying them into categories of risk of extinction, based on quantitative criteria and defined methodology. The most widely used criteria and categories are those created from the International Union for Conservation of Nature (International Union for the Conservation of Nature-IUCN). The red data books are a necessary and important tool for the elaboration of valid and credible action plans for the conservation of the species and the biodiversity.

Objectives of the project and collaborators:

For the project completion several agents like: the Cyprus Forestry Association, the National and Kapodistrian University of Athens, the Department of Forestry, the Agricultural Research Institute, the Environment Service and a significant number of individual researchers studying the Cyprus flora, contributed.

Importance of the book

The Red Flora Data Book of Cyprus is a luxury edition, of 472 pages with hardcover, including over 300 color photographs and texts in Greek with a brief summary in English for all the plants included.

The writing of the Red Data Book is something really innovative and consist a crucial point in the research arena concerning the issues of the Cyprus flora. At the same time, it represents both the most systematic and collective effort of almost all who are involved in the study for the Cyprus flora for recording and updating the existing knowledge about endangered plants on the island. The book is an acceptable basis as well as a starting point for the future monitoring and the continuous revision of the list of the endangered plants.

Furthermore, the Red Data Book is expected to contribute considerably in the following areas: