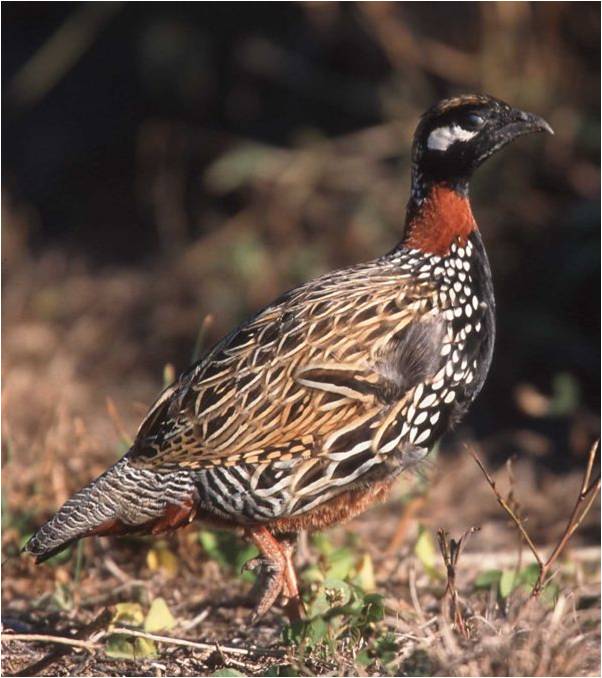 Description
The Black Francolin with the scientific name Francolinus francolinus is a bird with beautiful colors that impresses. It belongs to the family of Phasianidae, where the partridge also belongs and is a native species, it not only breeds in Cyprus but remains on our island for the rest of its life [1,2,3]. It is probable that he was introduced to Cyprus by the Romans. Black Francolin is also found in neighboring Asia Minor as far as India. It is worth noting that of all European countries it is found only in Cyprus [1,2,3].

The male usually has a brownish-black to auburn plumage. His chest is black with white spots. It is characterized by its brown-red collar and white dots on its cheeks. The female has less intense colors with mainly brownish appearance and thin yellowish streaks and spots. Black Francolin is the only native bird of Cyprus with a clear color difference between male and female [1,2,3].

Habitat
Black Francolin can be found in coastal valleys, river valleys and semi-mountainous areas up to an altitude of 700 meters. It is also rarely found in inland valleys near swampy areas. Large populations are found on the Karpasia Peninsula, on the southwest coast of the island, in Morphou and Paralimni.

Reproduction
During the mating season, usually in the spring, the male climbs to the highest points of the area and with his strong sexual attraction calls attracts the females of the surrounding area. They form monogamous relationships and the male determines the boundaries of the area in which the couple will remain. The nesting period ranges from mid-April to late June. The female builds her nest in bushy areas and can lay up to 12 eggs which she hatches for 22 days [1,2,3].

Preservation – Protection
What can we do to protect this native bird? There are many ways in which we can contribute to efforts to protect the environment and the Cypriot flora and fauna. Our daily habits will determine what the planet we live on will be, but also what environment we will pass on to future generations. It is therefore up to us to protect the natural environment, starting with changing our habits. Let’s try to protect the habitats where Black Francolin lives. Let’s avoid the use of toxic pesticides that poison our environment. Let’s say NO to poaching. We can;