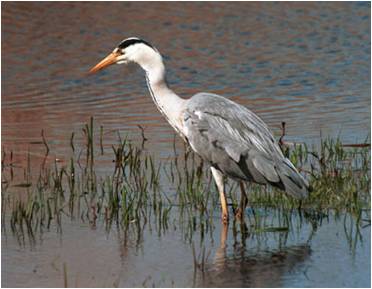 The largest heron that visits Cyprus during the migrations of autumn and spring [1,2,3]. In spring the predominant color on its wings is gray. There are also some black dots on its wings. Impressive is the double plume, dark blue, which starts as a wide strip above his yellow eye and ends behind the neck [3]. His head and neck are white. In the neck, however, there are some broken narrow strips that reach to the chest. It has a long yellowish beak and brownish-yellow legs.

Habitat
It is common in shallow waters, lakes, waterfalls, salt marshes and swamps. On our island one can meet him for example at the Despotic Lake in CYCERE Akrotiri, at Lake Oroklini in Larnaca and at Athalassa Park [1,4].

Food
It feeds on fish, rodents, amphibians, small snakes, shellfish, mollusks and insects. Like other herons, it can stand still for long periods of time until it detects its prey, so with a long shot of its neck, it catches it and devours it.

Reproduction
The gray heron lays 4-5 light blue eggs in a massive nest that it builds with branches on tall trees and which it returns with thinner plant material and leaves. The nesting period lasts from April to June. It usually nests in colonies in areas near water. In Cyprus there are records that it has nested several times in the past.