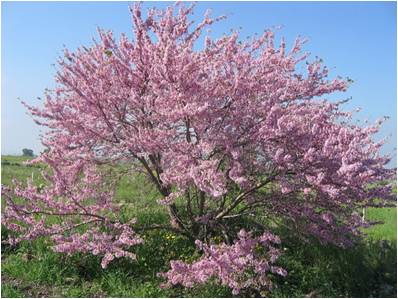 Description
The Judas tree is a deciduous shrub or tree up to 4 to 10 m tall. It is characterized by its open Branches, which is loaded with thin reddish-brown twigs. The special feature of its leaves is that they have an irregular shape and size, others are large, small and almost circular or heart-shaped.

Blossom
The flowering tree of Judah blooming mainly in the spring from March to May. Its flowers are characterized by intense purple color and its fruit has a reddish-brown color with a ripening period from June to July. It is a very special and beautiful tree, as it stands out with its dense purple flowers and its rich flowering [1].

Native plant of Southeast Europe and West Asia. It has been introduced in Cyprus for several decades and is found in the name koutsoupia or kotsikas. It has been planted in many parts of the island within the city, for example in parks, but also in the countryside, mainly in the area of ​​Machairas, Kyperounta, Panagia Bridge at an altitude of up to 1500m. It also grows in the coastal zone beyond the mountainous areas. It adapts easily to different types of soil, in which the basic condition is that there is good drainage. It is also planted in sunny or semi-shady areas [1,2].

According to religious legend, the name “the tree of Judas” is associated with the celebration of Easter and was especially attributed to the general perception that Judas was hanged on the black branches of such tree after the betrayal of Jesus. Still, the legend says that its flowers have “blushed with shame” because it was associated with the traitor Judas, which is why their red color is quite intense. However, there is a second version of the origin of the name “Cercis” that comes from the word “kerkis” a piece of loom, which in ancient times was made from the wood of the Joudas tree [3,4].