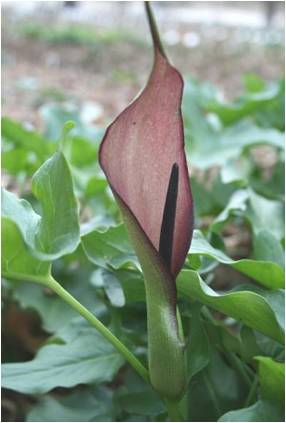 This plant is perennial, erect, tubular, with a height of up to 65 cm. It has a pleasant aroma and large leaf, measuring 8.5-25 x 5.5-27 cm, which grow directly from the basement tuber before flowering, towards the end of autumn. The young Stem is wide at the base, naked, green at the top, greenish or purple at the base and longer than the length of the lamina. The inflorescence stalk is 15-35 cm, even or shorter than the leaf stem. It is externally glossy greenish with purple-brown complexion and internally strongly purple. (3). The flowers, which are aromatic, are at the same height or higher than the leaf level (1,2,3). The male and female organs are in different positions but on the same flower. There are also barren male and female organs. The male organs are at the top of the cob, the females at the base. The fruit is a small fleshy grape.

Habitat
Generally, it is found in wet soils, in cultivated soils, and in uncultivated olive groves at an altitude of 250-600m. Germination is terrestrial. Flowering time starts from April to May and fruiting time in May to June (1,2,3).

Endemism
It is an endemic plant of Cyprus. It is included in the “Cyprus Red Book” and its designation as “Vulnerable” makes it imperative to protect it as it is at high risk of extinction.
It is an endemic species of Cyprus with two well-known sites: one in Kythrea where it was first identified in 1880 and recognized as A.orientale and the second in Androlykou in Paphos province. In the village of Androlikou, a sub-population of 880 plants was identified in 1998, which have all the characteristics of the A.orientale group but differ in the length of the inflorescence stem, which is shorter than the leaf stem length. After contacting Boyce in 2006, it was confirmed that Androlikus’s subpopulation is A. sintenisii, although the inflorescence is shorter than the leaf stem, a new feature for the species. In recent years, the subpopulation in Androluccus has not resettled and is likely to have disappeared due to the destruction of the plant habitat (1,3).

Threats
The subpopulation in Androlikos (880 plants) is threatened by overgrazing and land development for residential purposes. The second threat appears to have led to the disappearance of the plant from its only known location in the free area of Cyprus (1,3).

Protection
Some conservation measures are proposed, such as the installation of a small number of plants in the Akamas Botanical Garden, research for the sub-population in Kythrea, the research in the Kalograias region, from which it was collected in 1880. There was also research in Bretsia and the villages of Laonas, where it is believed that new subpopulations are likely to be identified (1).