The species of 2012, Unpublished en 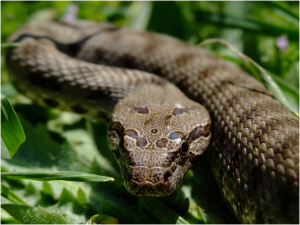 A strong snake that reaches a length of 1500 mm. It has a narrow elongated tail and diamond-shaped head that stands out clearly from the rest of the body. His eyes are big with round daughters. Its head at the top has a uniform “V” shape. There is also a brown line between the snake’s eyes which splits in two and reaches to the back of the head.

The upper part of the snake is yellowish to gray-brown in colour and is often confused with the viper. Some features that make the skin stand out from the viper are: It has large rhombuses along its entire body, from the back to the tail. He also has a longer head and round big eyes and when threatened he lengthens his head which looks much more triangular and stands out strongly from his body.

The Coin-marked snake prefers dry areas with rocks, some shrubs or trees. It is generally observed on rocky slopes, in trees and in old stone houses. It also shows a clear preference for lowland areas. It feeds on lizards, mice, locusts and crickets as well as small birds which it takes from their nests as it is good for climbing. This snake is an egg and lays 4 to 10 eggs which are usually left under stones between the months of June and July. The fact that the appearance of the stripe resembles that of a viper is protected by many enemies.

Behavior
The Coin-marked snake is a fast and agile snake that moves during the day. It has excellent climbing abilities and is not poisonous. When his prey is small, he grabs it and can swallow it whole while it is still alive. This particular snake, although not a particular threat to humans, is nevertheless very aggressive. If someone approaches it at close range and feels threatened, it will make a loud noise like a whistle and will not hesitate to bite him if necessary. His bite is quite painful and can cause bleeding.