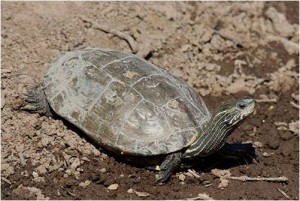 The Balkan pond turtle is a medium-sized water turtle with a not very large head and long neck. It has a small black oval shell. Its head, neck, limbs and tail are black to gray, while the turtle also has yellow or soft cream lines. Females have a more curved shell, are larger and have a thinner and smaller tail than males.

This turtle is a semi-aquatic reptile found in a wide range of freshwater lakes and streams. Some of the streams usually have water all year round or at least are divided into larger parts that retain water. The coastal areas of these streams are usually covered by dense vegetation which provides shelter for the turtle. Water turtles are omnivorous animals, feeding on amphibians, tadpoles, aquatic insects and larvae, and various plants. As for juvenile turtles, they meet their nutritional needs through meat.

As for the breeding cycle of Balkan pond turtle in Cyprus, there is little evidence. Small turtles usually hatch during April and May. In drier and warmer years, hatching can take place in February or early March. A typical turtle spawning includes 4-6 eggs with a fragile shell 22-36mm in size. In Cyprus, it is said that Balkan pond turtle bring good luck, which is why many people collect them to sell. Therefore, but also due to the destruction of its habitat, this species is included in the endangered.

Behavior
Mating usually takes place underwater, but we may occasionally find it on land. The eggs are placed in a hole in the ground which is dug by the female.

Source:
The Amphibians and Reptiles of Cyprus