The species of December 2012 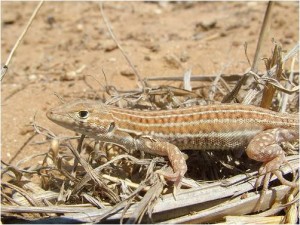 The lizard can grow from 73-93 mm (males) – and from 55 – 76 mm (females) and has a slender tail twice its body length. Her body is in an upright position, and she has a large head that is clearly separated from the rest of the body. The young species, as well as some females, have a red tail. One hypothesis for the above information is that the colour red offers protection from the male (which can become very aggressive, especially during the mating season). Body colour varies from grey to sandy bronze-brown, with various dark lines along the back and sides. There are various light spots on their feet. The young species have 6-8 light-coloured stripes on their backs.

Ecology
The “Acanthodactylus schreiberi” lizard prefers coastal areas with dunes and sparse vegetation or light soils near dunes. These areas are often dry with no trace of water. It can also be found in recently cultivated sandy areas along with oilfields as well as near fire zones. It generally avoids forests but can enter a forest area at least along with it although there are pieces of sand. The thorny lizard also lives in dunes with many shrubs that provide it with rich cover.

Behavior
This species, like the rest of the genus Acanthodactylus, is very aggressive and often involved in family fights. Males aggressively defend their territorial boundaries, and when they are about to mate, they treat their mates in a savage and aggressive manner. In addition, this lizard is very active, alert and has great speed for it and is difficult to catch by anyone.

Spreading
It is considered an endemic subspecies of Cyprus and has been recorded in two locations in south-eastern Turkey.

Source:
The Amphibians and Reptiles of Cyprus, 2009.