The species of November 2012 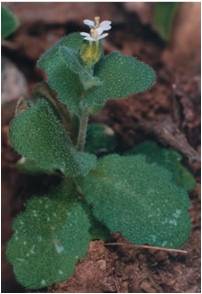 Description:
Annual or biennial, upright, 5-15 (-30) cm tall, with branching shoots, especially at the base. Leaves with sparse asteroid hair. The base leaves in rosette, anthoid – oblong, irregularly toothed, narrowed at the base in short stems or unpaired, shorter stem leaves, enclosed. Flowers very small, with 4 sepals and 4 white petals.

Distribution:
Endemic species of Cyprus. It is found at an altitude of 900 – 1350 meters. It was located in 3 locations: southwestern slopes of Chionistra, Tripylou area in Paphos Forest and Kryos Potamos.

Interest:
The species is usually found in rocky places with pyrite rocks as well as in semi-shallow rocky areas, along small streams and in areas dominated by Quercus alnifolia and Pinus Brutia.

Biology:
Flowering: April – May. Fruiting: June – July. The fruits that almost look like extensions of the branches are 25-40 cm long and are very narrow (1.5 mm). When ripe, they are dried and opened into two pieces that fall off, leaving an indistinguishable, central membrane that supports the tiny sperm.

Preservation status and threats
This species has been classified as CR (Critical Risk) according to the criteria of the IUCN Red List11 (iii) c (iv) + 2ab (iii) c (iv); C2a (i). This means that the area and the quality of the habitat of the species are declining, the number of individuals varies widely, and the remaining small populations are cut off and isolated from each other. The three known populations of the species include a total of a few hundred plants and cover an area of ​​less than 2 km. One of the populations receives the negative impact of human activities, which cause the destruction of the habitat of the species. In particular, next to this population, there is an organized recreation area, while military exercises are conducted in and around the place where the species grows.

Troodos rockcress is also potentially threatened by road construction or widening. Forest fires are also a danger. Unlike other annuals found in the same habitat, its seeds are neither hard-shelled nor temperature-resistant. Thus, a forest fire could endanger the species’ territorial seed bank.

What protection actions are required?

Although the entire population of the species is located in the Troodos National Forest Park, only one of the subpopulations is included in the Nature Protection Area. Areas, where the other two subpopulations develop, should be declared Nature Reserves.