The species of October 2012 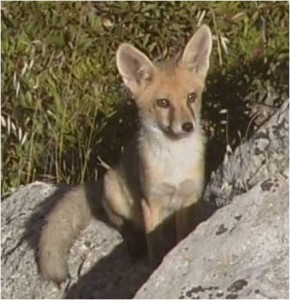 Description
The red fox is the largest species of all fox species, weighing between 2 and 10 kilograms. Its body length (except the tail) ranges between 50 cm and 90 cm. Its tail is quite large and has a length of 30 cm to 55 cm. Therefore, together with the tail, the fox has a total length of 80 cm – 145 cm. The tip of her tail is always white while the back of her ears and the front of her legs are black. It has pointed and upright ears, a pointed snout and a tufted tail.

Ecology
Due to its great ability to adapt to any type of habitat, the fox is found throughout the island: in mountainous, lowland and coastal areas, in dense forests, shrubs, parks and even near residential areas depending on the availability of food. It usually lives in caves, dense bushes or in holes in the ground which it opens itself. Its nests are characterized by the many entrances and exits they have.

Reproduction
The breeding season begins around January to February. The gestation period lasts about 50 to 55 days and gives birth to 3 to 8 young at a time, who are born blind and gray. They open their eyes at the age of 11-14 days and wean at 6-12 weeks. Both parents take care of their nutrition. The young live with their parents until the fall and then gradually move away from the nest area and become independent.

Behavior
The fox is a fairly intelligent animal and is often identified with cunning. Her intelligence combined with her speed and flexibility as well as her developed senses make her a skilled and efficient hunter. It is usually active at night due to its instinctive distrust of humans. Its activities vary and are directly affected by the current weather conditions. On cold nights, its movements are reduced, while on the contrary, hot and humid nights are the ideal conditions for excursions and hunting.

General information
It is an endemic subspecies and the only carnivorous mammal in Cyprus. Due to the fact that it was considered a harmful species for livestock and hunting, it was hunted mercilessly in the past, resulting in a significant reduction in its population. Today, however, many scientific studies show that it has a very small effect on poultry and livestock populations, while also having a beneficial role in natural ecosystems and agriculture as it helps reduce the populations of harmful rodents and mites. However, the fox is still treated with great prejudice.