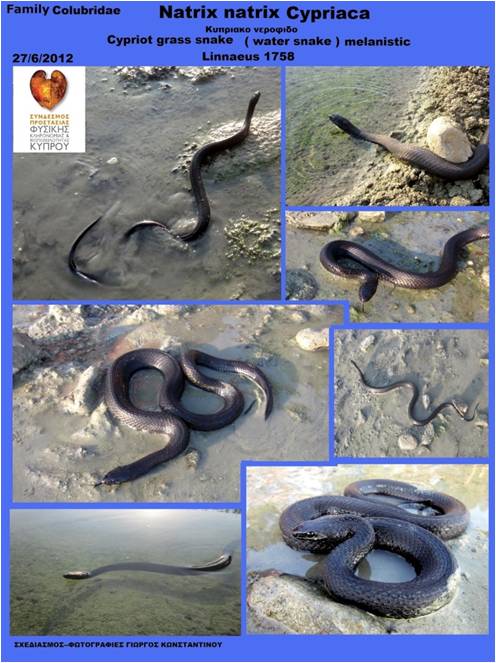 The length of its body does not exceed 1m, while the female is slightly larger than the male. There are three distinctive colour variants in Cyprus. The most common is gray, light yellow to dark brown, with round black dots or lines in the middle and in the body parts of the body. There are also some of them in black, and a number of black-faced natrix natrix marked with small bright spots [1,2].

It is considered an aquatic and day-old snake, it does not move at night. He is an excellent swimmer, dives easily and mainly chases his prey in water [1,2].

Others characteristics
It can be found from the end of March to the end of October [1]. It is worth mentioning that it does not bite or have poison. The only way of defending it is the secretion of a malodorous fluid from its glands. Its main enemy is the man who kills it because of misery, as well as other snakes [1,2].

Spreading
It is located in areas starting from the sea level and reaching an altitude of 700m. In particular, it is found in hedges, streams in the northern foothills of Troodos and in lakes in the eastern part of the island. In the Aetokremnos area in Akrotiri, which is the oldest archaeological site in Cyprus, fossils from which the natrix natrix originate date back to 10 000 BC were discovered [1].

Reproduction
The mating starts is from May to June and the hatching of eggs, usually 4-13 eggs, is between September and October. The natrix natrix comes from the end of March to the end of October [1].

Feeding
Its food mainly consists of frogs and rarely of fish [1,2].

Protection
Natrix natrix is one of the rarest subspecies of snakes in Cyprus and it is in danger of extinction. The existence of this snake on our island was first reported by a researcher who visited the island in 1787. This snake in the past was very common in Cyprus, but its population began to decline significantly since the early 1960s [1]. Today, only a few small and marginal populations of this snake can be found in only a few areas of Cyprus [2].