The species of January 2018 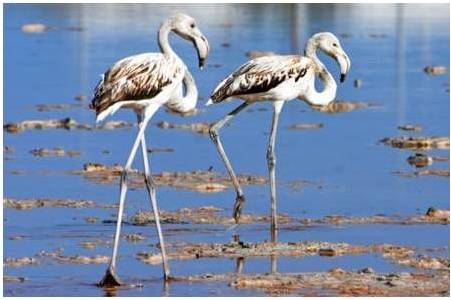 Flamingos are very impressive birds. The big flamingo has 120-145 cm length and 187 cm height. The male big flamingo is 3-4 kg and the female 2-3.3 kg. Its wingspan has 140-170 cm length. It has a thin body, long legs and long neck. The plumage is white in adult flamingos, but it often turns in pink because of the pigment that it takes from its food. Its wings are light or dark red with black edges. It has a pink beak with black on the edge. The young people have dark grey-haired colour with a white rump and almost black legs.

Feeding
They feed on tiny shrimps and green algae. Specifically, in our country, they feed on a sort of miniature shrimp, the Artemia. The unusual shape in their beak is a special adaptation, which helps them to filter and separate the mud from the shrimps and the algae. The pink or reddish colour of flamingos is a result of the carotenoid proteins they receive through their food.

Habitat
Flamingos are very social birds. They live in colonies that can amount to thousands. These large colonies are believed to aim for three main purposes: avoiding predation, maximizing food taking and exploiting the inadequate and scarce places they can nest.

Reproduction
Pairs that grow, both female and male, contribute to building the nest for their egg and their protection. The female flaming chooses the place to build their nest in the muddy. After the hatching of newborns, the only parental responsibility is feeding. Flamingos, therefore, produce milk, just like pigeons. Both parents pay attention to the newborn, which feeds on this rich on fat and protein milk. After 7-12 days, the chicks begin to explore their surroundings and so groups of chicks are gradually formed, where parents leave their young flamingos alone. Chicks that are not included in these groups are at great risk from predators.

Immigration in Cyprus
In our country, flamingos are a common immigrant and visitor bird to the two salt lakes, Larnaca’s and Akrotiri’s salt lake, during the winter. The immigration takes place from October to April. Their annual numbers and their arrival and departure dates vary as a result of the water level in the salt lakes. In Akrotiri, the first flamingos usually arrive in November and occasionally in October. Their number reaches the maximum during December-February and ranges from 5,000 to 10,000 birds. Until March, up to 3000 birds remain, and this number is gradually decreasing even further. The maximum number of flamingos recorded in Akrotiri salt lake was 20,000.

2017-12-21
annafiakkou
Share
Προηγούμενο Species of 2017
Επόμενο Visit of the Metropolitan of Mesogaias and Lavreotikis, Mr. Nikolaou