Ecology of the Endangered Endemic Species 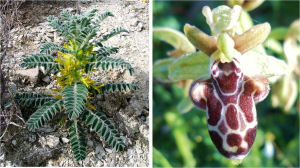 The study of the ecology and the population dynamics of endangered endemic plants is a powerful tool that can contribute to their conservation. In Cyprus 17 plant species are protected by the harmonizing legislation [153 (I) / 2003] about Nature Conservation. About these species significant gaps have been recorded in the basic ecological research concerning both their populations and their dynamics.


The aim of the present study is the ecological assessment of the status of the species population of Astragalus macrocarpus subsp. lefkarensis, Ophrys kotschyi, Tulipa cypria and Crocus hartmanianus. These species are strictly protected by the Convention of Bern and are included at the appendices II and IV of the European Instruction 92/43 EC as well as in the aligning legislation about the conservation of nature. Moreover these species belong into the Cyprus endemic, threaten plants and are about to include into the Red Flora Data Book of Cyprus.


For each species a monitoring plan was designed, which will be implemented at the field for three consecutive years at least. Initially, there was a detailed survey of populations in permanent sample plots that were installed in the study areas according to specific protocols that include follow-up data on the reproductive biology of the species, the size  of the classes of the population, the spatial distribution of atoms and biological (predation), environmental (geology) and anthropogenic (communities) factors affecting the species. Preliminary results indicate that the studied species show restricted distribution and small populations. Depending on the study area for each species, differences were detected concerning the phenomenology, the population density, the predation, the reproductive success and the anthropogenic pressures.

It is expected that the monitoring the species’ populations  that is planned will lead to a systematic collection of data so as to identify the possible changes in the characteristics of populations and their habitats, to assess their viability, and to state management proposals that will lead to their stabilization.

Participation of CY.C.E.R.E. in Fibonacci The Cyprus Center for Environmental Research and Education participated in ...