The species of November 2017 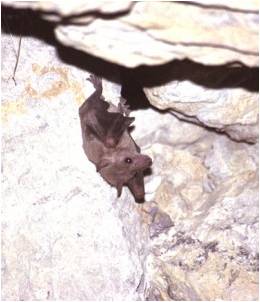 The largest bat species and only the only flying mammal in Cyprus. It is quite small compared to some of its relatives. Its wingspan averages 60 cm and body length around 15 cm (6 in). Its weight is typically around 160 g (5.6 oz).

Habitat
The bat can be found a caves, rock wholes and old quarries. Usually each nesting place includes colonies of thousands of individuals.

Distribution
The Egyptian fruit bat has extended but quite fragmented distribution since is found in the southeastern Mediterranean (Cyprus, s. Turkey, M. East and n.Egypt), the Arabian Peninsula, the Persian Gulf and in many countries of the sub-Saharan Africa nearly close to the sea.

Feeding
Feeds on fruit like peaches and it has been hunted since it was considered harmful for crops.

Protection
All the bat species in Cyprus are protected by European legislation. Even though the species is considered protected in Cyprus, mass killings and vandalizing of their habitats still occur since it is believed the species is damaging fruit cultivations. Additionally, the species is threatened by the collapsing of the quarries where they nest, the use of chemicals and in general the human distraction of their nesting places.