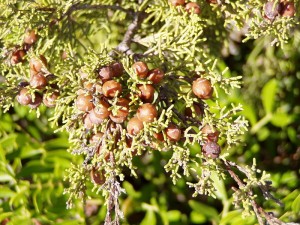 The Phoenician juniper is an aromatic, short, silver shrub or small tree, up to 10m high. The flowers are small and on the top small branches, the males are small weeds and the females are also cones, with a dark violet colour. It blooms from February to April.

The Phoenician juniper is a species of the warm and dry zone of the Mediterranean countries. Its spread in Cyprus starts from the sea level and reaches up to 500 m altitude. It responds to shrubs in various areas of the coastal zone. The most well-preserved Phoenician juniper forests in Cyprus are those of Akamas and Karpasias.

The wood of the Phoenician juniper is hard, fragrant and not insect-infested. In many parts of Cyprus, the villagers put small pieces of invisible wood in wardrobes to protect them from insects, but also as fragrances.
Its wood is very resistant to rotting and was therefore used until the beginning of the last century for housing and other buildings, as well as for the construction of ferns and fences. These uses were instrumental in shrinking and degrading its forests.
In antiquity, it was used in the construction of coffins. Dioskouridis also writes that the woods were used for the flavouring of wine. In addition to wood, the fruits are used to disperse the dead bodies of the kings. It is likely to be the species referred to as “juniper” by Theophrastus. Bedouins use the Phoenician juniper resin as an incense in religious ceremonies.

Reproduction
Propagates relatively easily with seeds and root cuttings. Plants are available in the nurseries of the Department of Forestry.