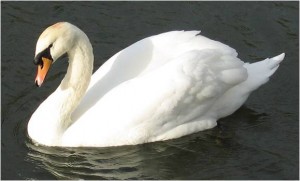 This beautiful swan with its white plumage visits our island somewhere. It is common, usually in the lakes that surround the two great lakes of Cyprus. This species is native to Asia, from where it was introduced to Europe mainly as an ornament during the Middle Ages and then around the world.

Mature birds have an orange beak with a sarcoma at the base that grows during the summer, while young birds lack a sarcoma on the beak and their plumage is slightly gray-brown. The little ones are born with a short neck and fluffy, although they are able to fly and swim just a few hours after hatching. The parents take care of them for many months, while in some species the mother carries them on her back.

Swans have a long neck, relatively heavy body, large legs, and fly with slow wings and wings wide. A special feature is the length of their neck, which carries 23-25 ​​vertebrae, instead of the 18-19 that the rest of the Chinomorphs. They migrate flying in a diagonal formation or in a V formation, flying at a great height. No other aquatic bird reaches the speed at which it moves either in water or in the air. They feed on aquatic plants, wandering superficially in the shallow waters, and not by diving.